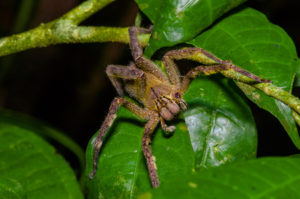 This new wandering spider can be identified by their dark brown bodies, with dirty yellow opistosomas (the posterior section of the body). Their bulging brown mouthparts, called chelicerae, come complete with a small red protuberance known as a condyle at the base, which make it appear to have two red fangs. The spider can reach an inch in length, with spindly legs that are generally twice that in length. While researchers haven’t measured the toxicity level of this new spider’s venom, one of them was bitten during their studies and experienced no pain or sickness from the bite, so they are pretty certain that us humans are safe from it. It may look rather menacing and has some pretty notorious relatives (Brazilian wandering spider), but it isn’t especially dangerous.

The researchers actually didn’t find the spider alive the first time, but rather they were doing research in Rancho Las Canvas in the Sierra de Las Cacachilas on the Baja peninsula in 2013 when one of them found a large exoskeleton. The spider that had been molting happened to be clinging to a rock overhang and was clearly a member of the Ctenidae family judging by it’s appearance. Knowing that spiders from the Ctenidae family are nocturnal, the researchers returned to where they had found the exoskeleton earlier that day in order to try and collect some live specimens. Expert on Baja California Sur spiders Maria Luisa Jimenez claimed, “”In all my experience over the years collecting spiders on the peninsula, I had never seen a spider this large,” Jimenez said in the statement. “I suspected that something new was waiting to be described.”