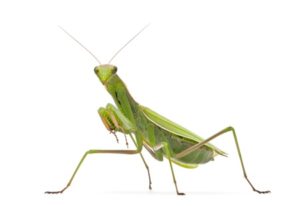 It is difficult to pin down the precise source of the rumor, but some believe it started because the praying mantis is naturally positioned to look as though it is praying, and it would be sacrilegious to kill any creature while it was praying. This is one of the more absurd theories concerning the origin of this particular rumor. It is more likely that the rumor was started by gardeners that wanted to keep the population of praying mantises high since they killed unwanted garden-pests. However, praying mantises kill any type of insect, even insects that are beneficial to the health of a garden. Perhaps gardeners from the 1950s did not realize that praying mantises kill indiscriminately, or the rumor has another origin.

For over a millennia, praying mantises have been revered by many different groups of people around the world for their supposed divinity. In southern Africa the praying mantis was considered a god on account of the mantises praying posture. The ancient Greeks believed that the mantis could help lost travellers find their way to their destination. The mantis is also the official state insect for Connecticut and South Carolina. This rumor most likely started as a result of a long tradition of mantis worship. It is probable that the rumor was started by someone coming from a culture that respected the mantis for its godlike features. In any case, you can step on a praying mantis right now in front of a police officer, and you can be sure that you will not be fined.

Have you ever heard the rumor about the illegality of killing a praying mantis?